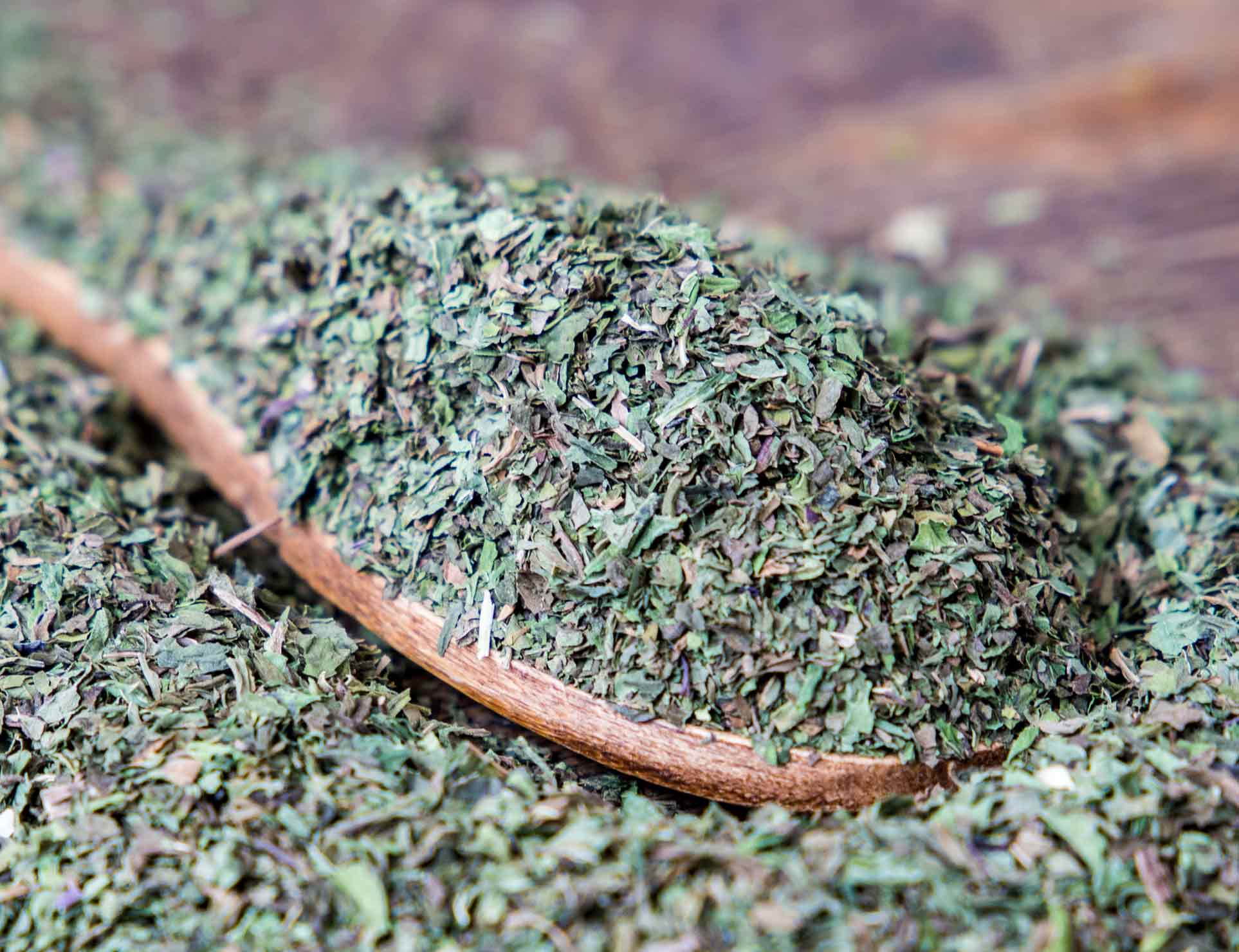 According to dried spearmint manufacturers, Spearmint plant is a perennial herbs leaves, it can be used either dried or fresh. The dried herbs keep a flavor with powerful taste. The leaves of mint have a fresh and delightful flavor. Spearmint plant taste is refreshing and ripe with a taste of cheerfully pungent and lemon undertones.
Spearmint leaves is the most used kind of mints with the people of the Mediterranean and southern Europe. Dried peppermint leaves is an excellent is an outstanding extension to any cabinet of complete spices. Bulk dried mint is more favorable than fresh one in The Arab countries and the Mediterranean eastern region.
Dried Spearmint leaves are recognized as dried mint without particularly naming for Spearmint plant or Peppermint
Mint is a cheerful herb that has an amazing flexibility. It is added to many sweet plates such as pastries (especially chocolate) and gum. It also added to savory plates in many countries like Greek, Middle East, and Turkey.
The best use of dried mint is to flatter bolder aromas like rubs which pepper and chiles are thick or the vegetable of hearty roots, while spearmint leaves is preferable to fruits, meats and principal ingredients in many sauces of yogurt.
The well-known dishes that contain dried mint is Tabouli in the Middle East and Keftedes, the Greek meat dish, in addition to the Turkish yogurt and cucumber salad “cacik”. While spearmint plant gives cheerful relish to many plates such as lentils, vegetable stews salad, bean soup, cooked vegetable and noodle.

Helping in digestion:
Mint is considered an excellent appetizer or magnificent delicatessen or dish cleanser. Also it enhances the digestion system and can calm the stomach from any inflammation or indigestion. If your stomach harts you, just dink a cup of mint tea and it will be relieved.
Nausea and headache treatment:
The Mint leaves can cure headache and nausea. As mint’s strong aroma considered a functional and speed cure for nausea.
Spearmint leaves is able to relax the headache and migraines related inflammation and temperature rise.
Stop the disorders of respiratory:
Mint’s strong aroma is able to remove nose, bronchi, throat and lung congestion that relieves the disorders of respiratory. Because mint is able to calm down the respiratory channels, nose and throat.
Care of the skin:
The juice that extracted from mint is a very good cleanser of the skin, but the oil of mint is considered a good material for antipruritic and antiseptic. Mint also can calm the skin inflammation and aids in treat itchiness and infection. It also can cure some acne symptoms
Thanks to the Characteristics of anti-pruritic that mint has, it can cue the bits of insects such as mosquitoes, hornets, honeybees, and gnats. It gives you a sensation of cool that refresh you from agitation, and the mint anti-inflammatory reduces tumor.
Save memory:
According to new studies, mint effects on the functions of retention, cognitive and alertness. Also the studies revealed that chewing gum with mint frequently, higher the levels of mental alertness and memory retention.

Back to Nature with ancient Egyptian and Spearmint plant:

Breath mints history:
Despite the Egyptian had specialists in many problems related to medical, but unfortunately, they did not have dentists or oral surgeons to repair their degraded teeth and gums. As a result, many worn teeth were found in the mummies examined by the scientists and this proves abscesses even in the Egyptians youth.
Egyptians then invented the first mints to face the bad smell from their rotting mouths. Which was a mixture of frankincense, bitter and cinnamon boiled with honey and formed into pellets
Pharaohs used mint oil to treat colds
And as a Stimulants
And as a Topical analgesic
And as a disinfectant
They added it to the medical drugs to improve their smell, and they used it in the preparation of aromatherapy aromas