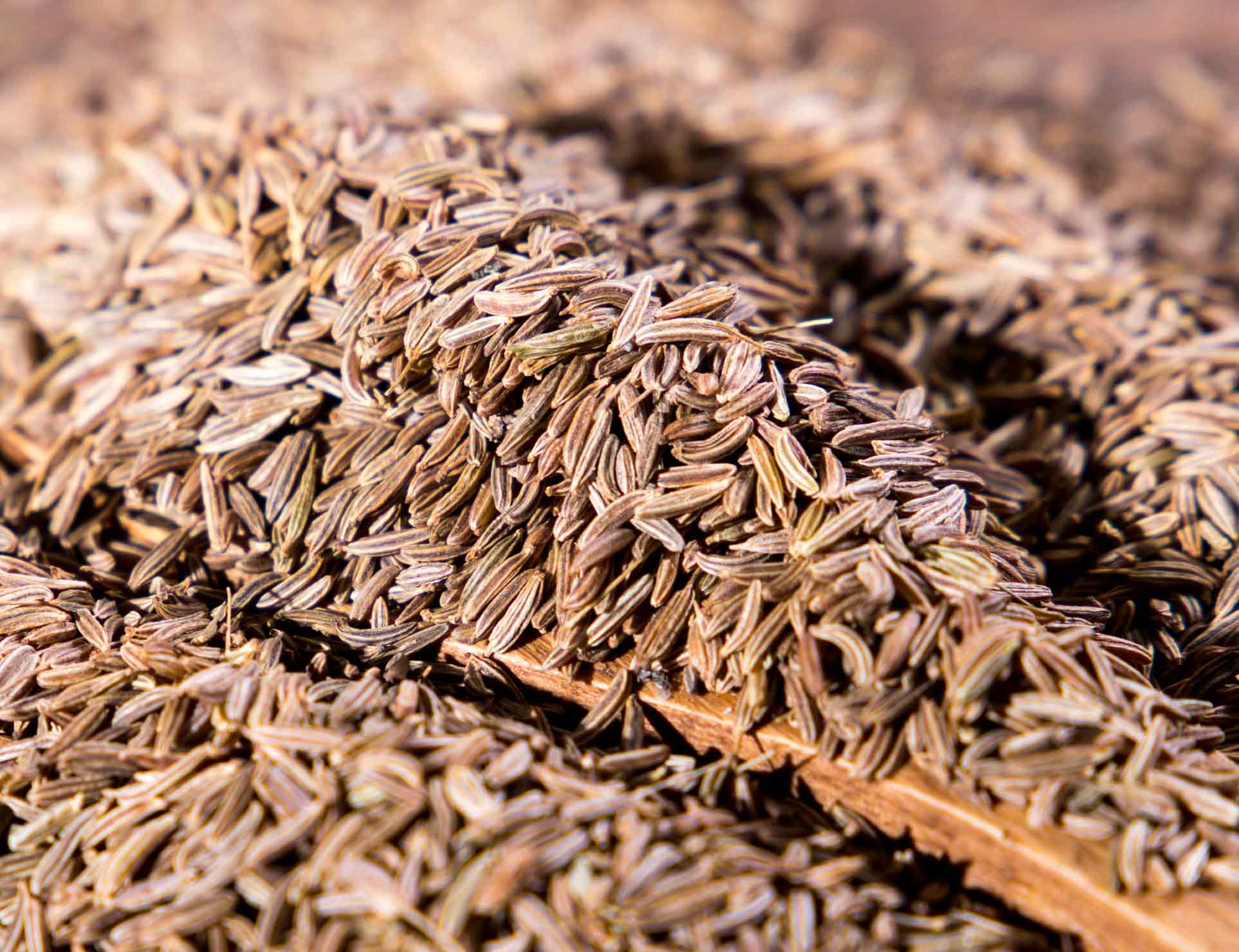 Caraway’s etymology is poorly understood and complex.
Many names have been lunched on Caraway; in Latin it called cuminum (cumin). Greek called it karon (again, cumin), which was adapted into Latin as the Sanskrit karavi, sometimes translated as “caraway”, but other times understood to mean “fennel” and also carum (now meaning caraway).
The English have beun to use the word caraway sonce 1440 at least, whenever Walter William Skeat considered it an Arabic original word. So that the word Katzer back to the Arabic word al-karawya (cf. Spanish alcaravea) to be derived from the Latin carum.

Caraway is being planted in Finland, whereas it supplies nearly 28% of the world’s caraway seeds production according to a Statistic on 2011.
Finnish is the most suitable place to plant caraway because of its climate and latitudes, which ensure long hours of sunlight in the summer.
The produced fruits are containing higher levels of essential oils comparing with the produced fruits from the caraway which planted at any other main country such as Canada, the Netherlands, Egypt, and central Europe.

1- Carum carvi is used as a spice in breads, especially rye bread. And the caraway’s fruit used a whole, and have flavor like anise and aroma that comes from Essential oils, mostly carvone, limonene, and anethole.
2- Carum carviis also used on other food such as casseroles, and desserts.
3- European kitchens also use caraway in many kinds of food such as it is frequently added to sauerkraut and it is used in caraway seed cake. The roots of caraway are cooked as a vegetable like parsnips or carrots.
4- In the other hand, caraway leaves are consumed as Raw, herbs, dried, or cooked, like to parsley
5- But in the Middle Eastern kitchens, caraway is a popular dessert during Ramadan; its pudding is called Meghli. In Levant, caraway is made and served in winter and on the occasion of having a new baby.
6- In Syria, the Caraway is used to make keleacha, which is the name of sweet scones.
7- Caraway fruit oil is entered in components of lotions, perfumes and soaps.
8- Caraway is also used in folk medicine as a breath freshener.

List of caraway seeds health benefits that are beneficial to us:

1- The oil and seeds of Caraway are used in strengthen the stomach and kill hookworms (anthelmintic). Its oil also has a constituent called Carvone which is used as anthelmintic.
2- Caraway is considered a very good carminative, whereas it eases the gut, providing relief from gas, and flatulence and bowel spasms.
3- Caraway has Antitussive effect in treating cough.
4- Bulk Caraway seeds able to strengthen muscles heart, prevent atherosclerosis, lower blood pressure and bring down cholesterol levels, which is excellent in the health of hart.
5- Caraway oil has excellent disinfectant and antiseptic properties which are so effective for curing infections anywhere in the body.
6- If you take Caraway seeds oil, it is useful in getting rid of bad breath and gum disease.
7- Caraway is helping in beginning menstruation and increases.