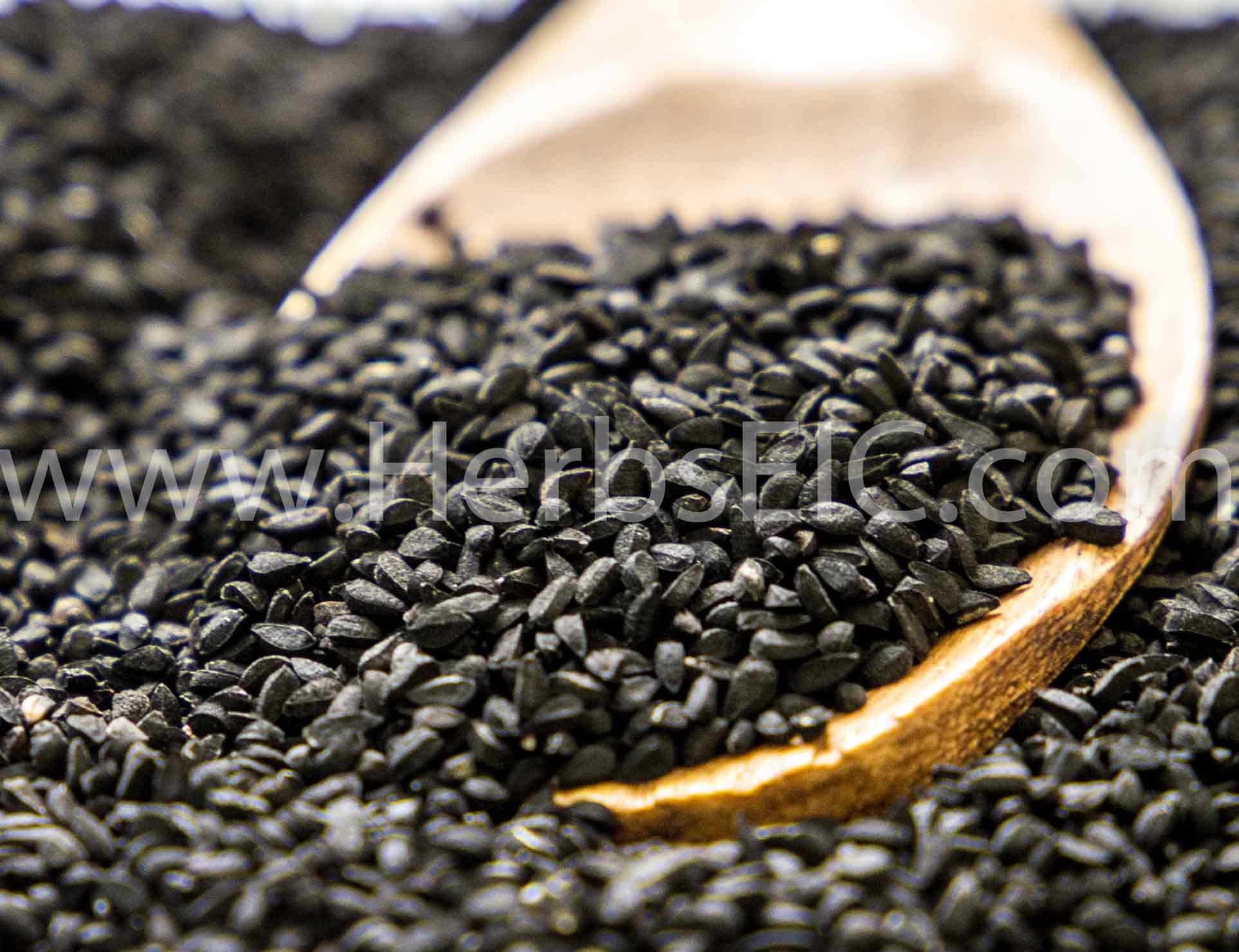 Nigella sativa is a yearly plant which is backing to Ranunculaceae family. It is originally planted in south and southwest Asia and has many names such as Kalonji, Black Cumin, Nigella, Black Caraway, Habbatus Sauda, and HabbatusSauda.
Nigella sativa tall is varies between 20-30cm, and its leaves is finely divided, linear. Its flower is soft and has a pale blue and white color, within five until ten petals.
Nigella sativa has a large and inflated capsule, it is consists of 3-7 united follicles each of them is including numerous seeds which are used as spice, sometimes as a replacement for black cumin (Bunium bulbocastanum).

Ancient Egyptian was between the first who use Nigella sativa. They used its oil to nourish the skin.
Besides bulk nigella sativa is used to improve digestive and as a cure for many problems and diseases.
Ancient Egyptian was the first to use Nigella Sativa’ black seeds as a spice as it was an important component in many dishes.
Pharaohs’ main doctor always had in his bag a bowl of Black Seeds handy as he used them in curing many diseases such as colds, toothache, headache, and many infections.
Archaeologists have found a bottle of this ancient medicine-in preparation for life after death at Tutankhamun grave.
Black cumin is called Habbatul barakah in the Arabic culture since 3300 years ago. That is mean “seeds of blessing”. Prophet Muhammad also advised to use Black cumin; he said that it is “a medicine for all illness except death.”

In India and the Middle East, the seeds of Nigella sativa are used as a spice; they have a taste of a combination of onions, black pepper and oregano.
In some culture, black seeds are added to flavor bread products; they also are used instead of pepper in recipes with pod fruit, salads, vegetables, and poultry.

1- Cancer:
Scientists have found that two phytochemicals in black seed oil can resulted in 52% decrease in tumor cells after they evaluated the antitumor activity of thymohydroquinone , and thymoquinone in mice.
2- Liver Health
The black seed oil can improve the liver’s function and prevent dieses and damages as many scientists had found.
3- Diabetes
by the Journal of Endocrinology and Metabolism has published an article by researches issued by the Indian council found that black seeds oil can growing the lowered serum insulin concentrations and reduction the elevated serum glucose as it and Metabolism, researchers from the Indian Council of Medical Research highlight that black seed oil “causes progressive in part of regeneration of pancreatic beta-cells.
So Nigella sativa is helping prevent both type 1 and type 2 diabetes.
4- Weight loss:
Nigella sativa is considered one of the plants that have anti-obesity properties and considered the most effective natural medicine on the planet as a report published in The Journal of Diabetes & Metabolic Disorders.
5- Hair:
Black seeds oil helps in restoring hair loss, by strengthening follicles and roots of the hair.
6- Skin and eyes:
Melanin is pigments that protect the skin from damage which is produced in the retina, choroid and epidermis.
Nigella sativa is promoting and inhibiting melanogenesis, as it is the main chemical responsible for giving eyes and skin their color.